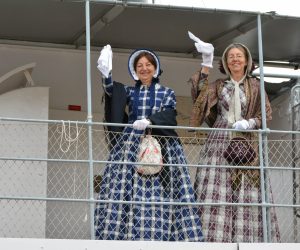 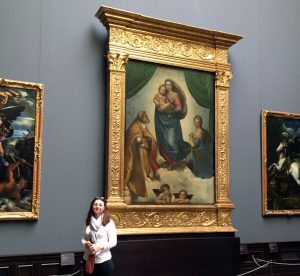 When Augusta mentioned that Dresden’s art gallery was “indisputable the most pleasant reminder of the Kings of Saxony’s appreciation for art” and “held in the highest esteem by the entire travelling and educated world” I was looking forward to visiting the Gemaldegalerie Alte Meister.

She especially mentioned a painting by Rafael:

“Naturally, we spent most of our time in the room where the world-renowned Madonna di San Sisto, and other excellent paintings of Rafael are shown.”

Augusta was not the only Swedish traveler who mentioned this room and the Madonna painting. Sophie von Knorring was a Swedish writer who visited Dresden in 1846, a year before Augusta. She published a book from her letters home:

“With the catalog in hand and  having walked through several rooms,  we finally arrived in the room where Rafael’s masterpiece, the world-renowned Madonna is hanging. But no! We could not see much of it! The heavenly-wonderful painting was hidden by a large framework and by a painting, on which the Madonna in the same size was being copied – and the copyist was a woman!”

Sophie von Knorring  voiced her irritation at not being able to see the original, and she also did not approve of a woman painter.

Her companion tried to placate her by praising the copyist’s work.

“You have to admit that her work is beautiful.”

But Sophie was so upset that she didn’t even want to glance at the copied work. Then she heard, from the top of the scaffolding, in clear Swedish:

“Oh, I hear that you are my fellow countrymen, and I am sorry that I am in the way for everyone, but especially for you!”

The painter was Sophie Adlersparre, a young Swedish woman who was studying art in Dresden. Her education there was financed by Queen Josefine of Sweden.

Sophie Adlersparre descended from the scaffolding and joined Sophie von Knorring and her companion and was happy to give them a guided tour through the museum. All was well again.

And now, we were visiting the famous gallery, on a windy, rainy October day – 170 years after Agusuta’s visit. I have to admit, that I have never taken an art history class. And I didn’t even look up the painting before visiting the gallery in Dresden – I wanted the painting to be a surprise.

After walking through several floors and many rooms of Renaissance paintings, we finally stood in front of Rafael’s The Sistine Madonna or The Madonna di San Sisto. At that time, I wished I would have known more about the painting. All I knew was that Augusta had stood in awe in front of this painting and that Sophie von Knorring had met Sophie Adlersparre in this room.

I didn’t know that Dostoyevsky had described the painting as ”the greatest revelation of the human spirit”.

I also didn’t know that during WWII, the painting was stored in a tunnel in Saxon Switzerland (maybe close to where we were hiking?) and then brought to Moscow before returning to Dresden in 1955.

I was still more interested in the undocumented, personal story. For example, what happened to Sophie Adlersparre’s copy that she was working on? After some searching, I found it. Queen Josefine had gifted it to the Catholic Church in Oslo, Norway: St. Olav’s Cathedral, where it can still be seen at the right of the altar.

But the biggest surprise of all were the cherubs at the bottom of the painting! I had no idea that those famous cherubs were part of a larger painting, and now I have seen the original – thanks to Augusta’s diary.