It is evening and on top of all it is the large and remarkable illumination evening. For the last three days, I have missed my Adolf and in vain waited for you at the usual time; in vain longed, in vain complained, but this evening, yes this evening, there are no limits to my sense of loss and my disappointment. Tonight I am all alone in the house, completely alone with myself, my memories, and a large number of lit candles. Their clear flames do not harmonize with my mood at the moment….

I have with resentful glances viewed the artificial sea of light that surrounds me from all directions, been ready to blow out every candle, and sit in the dark….

The family just got home from their outing around town, frozen and frightened by the commotion and crowds. A great many of the displays had failed and they had not managed to see some of the most beautiful illuminations like the Bourse.

Adieu for today, my Adolf, more another time.

During the summer of 1852, King Oscar I was ill. For that reason, the King and the Queen spent time at a spa in Bavaria. Two of their children, Eugenie (age 22) and Gustaf (age 25), visited them. On the family’s return trip to Sweden, Prince Gustaf died from typhoid fever and the King had also contracted the disease. Swedes worried that the King might not survive. When in February the King started to recover, the elders of Stockholm decided to arrange a public celebration in the form of an “illumination”. During this event, voluntary contributions to various charities were also encouraged.

The illumination evening on the 9th of February 1853 started at 6:30 pm with a monumental firework display to the music of Svea Artillery’s Band. Small torches had already been lit to illuminate public buildings and places around town. Many private residences were also illuminated. The most elaborate display was the Bourse while another fascinating 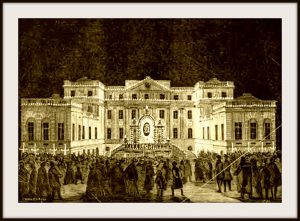 display was a pyramid made of 80 stacked barrels of tar. The display attracted a huge crowd of spectators when lit. The illumination displays ended at 10 pm at which time many social banquets started.

But Augusta missed it all. She was seriously ill with tuberculosis and couldn’t go out and see the amazing illumination with the family Hjort.

We are just grateful that she mentioned the illumination in her letter, and that our family kept those letters for future generations. A piece of forgotten history rediscovered.