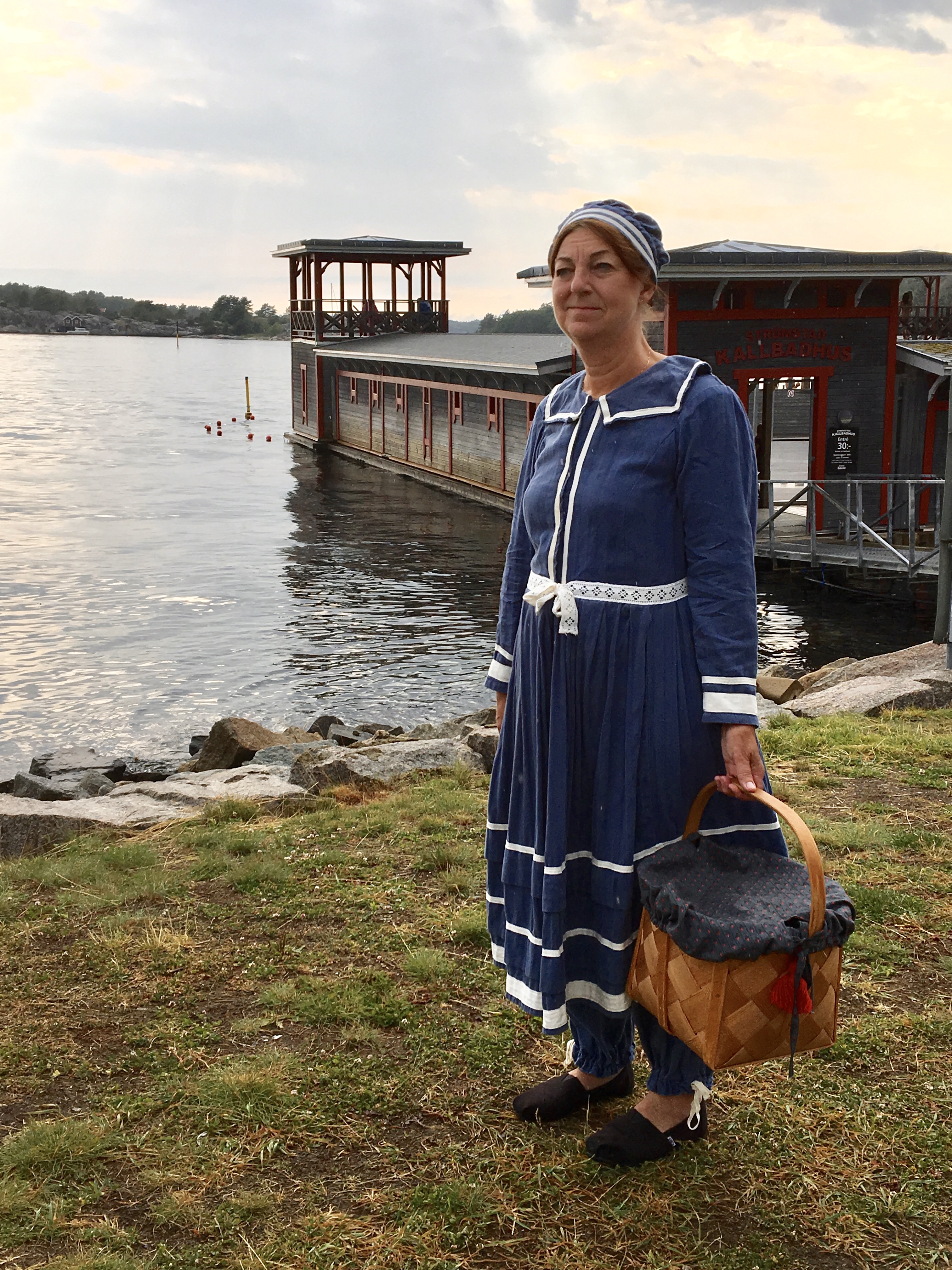 And what is a Valerie?

My last blog entry was about Hedda Heijkenskjöld. What I didn’t include was the fact that she owned an exquisite Valerie, or at least, that is what Marie-Louise af Forsell wrote in her diary.

During our absence, the family of Colonel Prytz from Malmö had come to visit. Nycander now wanted us to return the visit and I promised, therefore, to put on the gray silk dress on condition that we would then visit Dimanders in the afternoon. It turned out that the Prytzes had already left for Finland – but on our way there, Nycander recognized Tante Netta’s carriage in Jakobsgränd street with Adelaide Rütterskjöld in it. He mentioned to them that we intended to pay them a visit – and when we returned home, Tante Netta had already sent word that they would be home this afternoon.

Thus, at 6 pm, we took the same route as yesterday to Djurgården. To my delight, there were unusually few people at Dimanders, only Nymans, Mrs. Wijkander with Mamsell Eld (who soon left), Mrs. Göthe, and Mamsell Röhl, who was accompanied by the honorable Wirrman (who they had run into in the streets and asked to join) – and Liljewalchs who were, like us, “volunteers”.

The gentlemen played, to which Mrs. Dimander first requested our permission, and Mrs. L. (one of the decent Mamselles Strömberg), together with the girls Rütterskjöld and I, spent the whole evening in the parlor, conversing. It can easily be understood that I had fun, as my stocking was allowed to rest undisturbed in Hedda’s admirable valérie.

It can easily be understood that I had fun, as my stocking was allowed to rest undisturbed in Hedda’s admirable valérie?

When I read this diary entry, the last sentence was cryptic. What did it mean? First I imagined a group of teenage girls laying around, having so much fun, and one of them putting her foot (the stocking) on her friend’s lap.

Of course, that is not how teenage girls behaved in 1847. And especially not if they were wearing silk dresses and conversing in a parlor. And what was a valérie (or Valerie)?

This is where a Google search fails. There are zillions of famous women named Valerie. So instead, I reverted to searching for the term in the digitized Swedish newspapers during the mid-1800s. And that is where I found the Valeries. Actually, the Valeries all appeared in the lost and found columns of the papers. I found 15 notes of lost Valeries.

A Valerie was described in the newspaper ads as a large Reticule or a Pirate. Reticule (Swedish: Ridikyl) was the name of a handbag or purse during this time period. Most reticules were small drawstring bags. Pirates (Swedish: Pirat), on the other hand, were larger bags. Often they are mentioned in Swedish novels as belonging to older women and being large enough for carrying home leftover food from parties. Is that how the large reticule got its nickname? And if so, did young women who needed larger reticules for their sewing projects and books, resent their reticules being called Pirates and therefore started calling them Valéries?

The first ads for lost Valeries appeared in February of 1847. One ad stated that the Valerie contained sewing items. The other one described the Valerie as being made of Zephyr yarn, being green and yellow, and having a lock made of steel.

Then in March of 1847, someone lost a velvet Valerie in Stockholm:

Lost on Sunday evening, the 7th of this month, between Fredsgatan and Stortorget, a Reticule or so-called Valerie of brown and white, checkered velvet, containing a cambric handkerchief with lace, a knitting stocking with a silver knitting holder, a key, a pair of gloves, and a pair of knitted silk gloves. A reward is promised if the finder submits these items to the coffin store in house No. 30 at Skomakaregatan.

There were other lost Valeries – crocheted in different colors, lined with silk fabric, and some containing locks. Most of them contained handkerchiefs and knitting or sewing items. One contained money; another one a gold watch chain. There were also gold thimbles, stockings, and confectioneries that the owners reported as the content of their Valeries.

Suddenly, the sentence “It can easily be understood that I had fun, as my stocking was allowed to rest undisturbed in Hedda’s admirable valérie,” made sense. The stocking Marie-Louise was talking about was probably a knitting that she would pull up if the party got boring. And we should all understand that she had so much fun that she never had to get her stocking out of Hedda’s Valerie.

I have not been able to find a single image of a Valerie. There are some images from the 1840-1850s in the Nordic Museum in Stockholm that are labeled Travel Bags. They are of the type with a metal frame rather than a pull string. The Valeries that had a lock would probably fall into that category. There is only one picture of a Pirate, although the museum lists having several Pirates in their collections. I imagine that some Valeries could have looked like these travel bags and others would have been large crocheted bags.

There are also advertisements for Valeries in the newspapers (without images), for Valerie-locks, and for mounting – I assume mounting the fabric to the hardware and/or stitching an embroidery to a leather purse.

Valeries in the Literature

One of the hits when searching on Valerie in the Swedish newspapers was a feuilleton about a love-sick, spice-merchant. It described what a lady would be expected to carry in her Valerie:

“Spice-merchant Mandell was overjoyed when he discovered that the lady had unusually small feet which mischievously peeped out from under the hem of her silk dress. She sat down on the bench, right in the place where the already love-sick, spice-merchant had taken up his post. She started looking in her Valerie that she had brought with her. Mandell thought to himself: Let’s see what she will pull out; probably a novel, or a poem, – no, it was a knitting of a stocking. She is homely and used to handicrafts, thought the spice-merchant, – so much better, she will keep an eye on the maids and make sure that things get done in the house. The lady was soon busy with her knitting and Mandell, who had steeled himself with courage and repeated the fine speech he had decided to deliver, now took the time to step forward and introduce himself to his beauty.”

Besides the digitized newspapers, Kerstin reminded me of The Swedish Literature Bank, a website for digitized, classic, Swedish literature. She sent me a link to a novel where a woman puts a dead cat in the Valerie. Yes, you would need a large purse!

What else could I find there?

The famous Swedish feminist and writer, Fredrika Bremer, expressed in a letter to the likewise famous writer, Malla af Silfverstolpe, her gratitude on behalf of her mother for the Valerie that Malla had made when visiting them at Årsta. 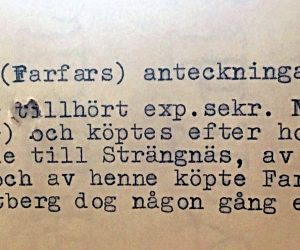 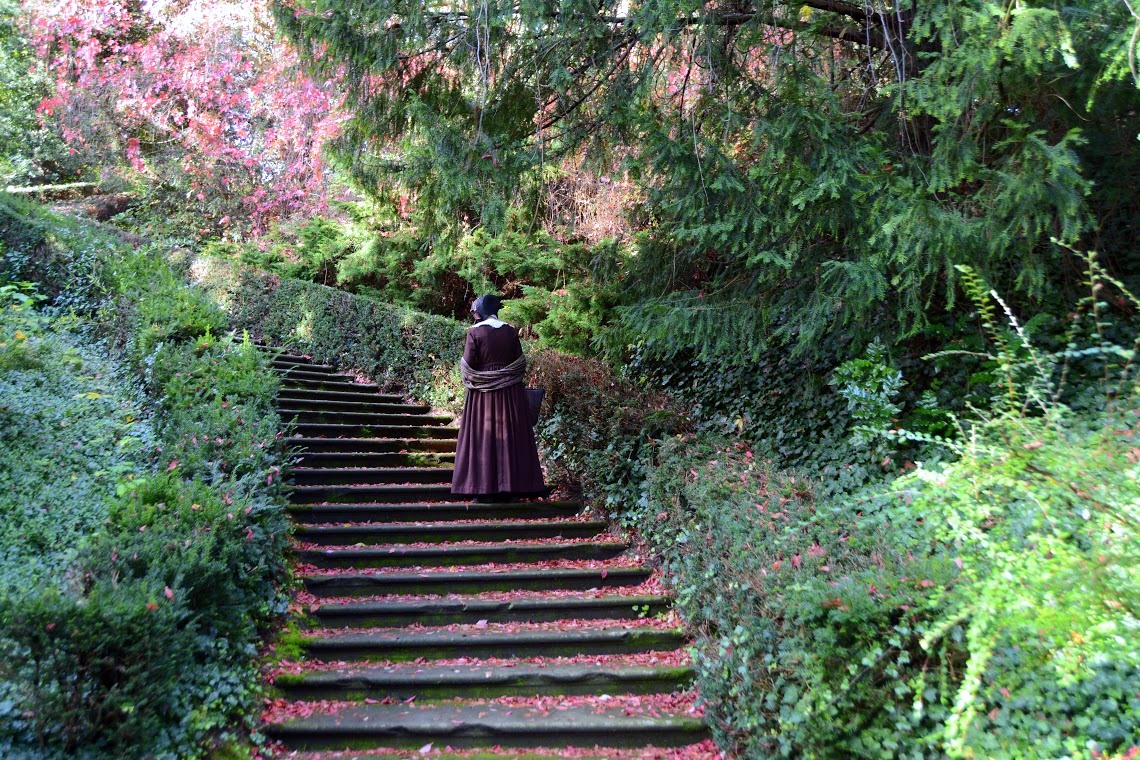 Packing for the trip through Germany

I really dread packing. My suitcase always seems too small and my clothes inevitably weigh too much. And then I throw in things that I might need and would regret if I hadn’t brought along. The luggage scale is my enemy.

Packing for our trip in Germany was a different challenge. We would be travelling by train and there were no limitations to weight or size, except for the fact that we would have to manage our luggage between trains and hotels. Augusta would probably have packed her outfits in a trunk. Porters and maybe “Lohnbediente” (servants for hire) would have taken care of the luggage.  I imagine that she would have carried a small bag with her on the train, in addition to a reticule or a small purse.

The first thing I did was to buy a new suitcase with a matching bag in an antique-looking paisley pattern.  I was not going to travel with my home-made carpet bag and hat boxes. And definitely, no trunks!

So what kind of clothes did I bring?

In addition, I brought a hand fan, an umbrella, a parasol, opera glasses, a reticule, an embroidered purse, jewelry, hat pins, and hair ribbons.

And then there were guide books, reading material, a diary, and a sketch book; wool for knitting, protein bars for days we might not easily find allergy-suitable food, and emergency kits. Not to mention, lots of safety pins.

And of course, what Augusta could not have dreamt of: iPhones, chargers, and extra batteries.

For the record, I didn’t bring my laced corset even though I spent a lot of time making one. I figured, no one would know and it isn’t a very comfortable piece of clothing.

Getting dresses in the 1840s took time and one would need help with dresses that had hooks and eyes for closure in the back. One would also need help with braiding and putting up the hair in the style of the times.

Every morning, Kerstin and I picked clothing based on the weather. If it was going to rain or be chilly, the wool dress with a shawl was perfect. For train travelling, I preferred the green-and-yellow checkered cotton dress with the green pelerine. And on a few sunny days in Lubeck, I did have use for my cotton skirts.

So what did I learn?

The wool pelerine was very useful when it was drizzling and cold.

Bonnets are great when it is windy and cold.

Fingerless gloves are beautiful and perfect when using an iPhone.

Dupioni (silk), which we used in our ball gowns, is a great fabric – it is very light and it doesn’t wrinkle. Why aren’t more clothes made of this beautiful material?

Walking around in cotton pantaloons (I even bought a pair of flannel pajama paints from H&M – same thing really) under 2 starched petticoats and a dress or a skirt is great! With the layering, you are never too hot or cold. And I loved the rustling sound of the starched petticoats when walking!

One evening, when we had to find a restaurant in Berlin and it was raining, we decided to just put on jeans – returning to present time! There were four revelations: 1. Getting dressed took less than a minute, 2. Walking didn’t make any rustling sound, 3. You almost felt indecent not wearing a full length skirt and no head covering, and 4. You became invisible – you looked like the rest of the people on the sidewalks and no one took any notice of you.

What will I incorporate in my 2017 every-day wardrobe?

Definitely lots of shawls. Fingerless gloves. Clothes made of wool and silk. And when at home, definitely pajama pants!

Album of the wardrobe

The dupioni-silk, ball gown worn at Semperoper in Dresden:

Gloves and a few accessories: