Dressed in the fashion of 1847, Kerstin and I enter the breakfast parlor at Hotel Anno 1216. The early morning sun lights up the room. The décor of the room is exquisite. The table settings are elegant and on each table is a fresh cut tea rose.

We get a warm welcome from the staff who shows us to our table and asks for our preferences regarding coffee. Kerstin has ordered a continental breakfast. There are no vegan choices here, so I will just pick a few grapes and orange slices off her plate and pair it with my emergency protein bar.

Through the old, large windows we can see the sunlit brick wall of a building across the street. It was at this location that the wool merchant, AP Rehder, and his family lived in 1847. And it was the Rehder family who hosted Augusta and her mother on their first visit to Germany. Augusta might have been sitting in their breakfast room looking at the house where we are now sitting. And interestingly, a few years later, AP Rehder bought the house which is now or hotel, Hotel Anno 1216.

Kerstin helps herself to juice that is available on an antique buffé table. The scene looks like a painting. Kerstin, dressed in a dark blue dress adorned with a lace collar and with her hair tied in a bun, is poring sunlit orange juice from a crystal glass carafe. I make a mental note to paint the scene when we get home from our journey.

As Kerstin is enjoying her continental breakfast (and I am picking the garnish off her plate), we wonder what type of breakfast Augusta would have had in the Rehder’s breakfast room across the street. What did they eat for breakfast in Lübeck in 1847?

The Nobel Prize winner, Thomas Mann, described in his novel, Buddenbrooks – a novel about a wealthy merchant family in Lübeck – what Tony, the teenage daughter had for breakfast in 1846:

Tony came down at nine o’clock and found her father and mother still at the table. She let her forehead be kissed and sat down, fresh and hungry, her eyes still red with sleep, and helped herself to sugar, butter, and herb cheese.

“How nice to find you still here, for once, Papa,” she said as she held her egg in her napkin and opened it with her spoon.

Tony, her mouth full of bread and butter, looked first at her father and then her mother, with a mixture of fear and curiosity.

“Eat your breakfast, my child,” said the Frau Consul. But Tony laid down her knife and cried, “Out with it quickly, Papa – please.” Her father only answered: “Eat up your breakfast first.”

So Tony drank her coffee and ate her egg and bread and cheese silently, her appetite quite gone.

But did they have grapes and orange slices for garnish? Probably not. Happy we got some. 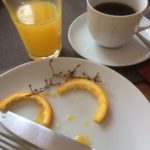 May God Preserve our Silk Worms

Father told us last Monday when he was here, that the kind pastor, Mr. Lindström, who my sister and I have recently been acquainted with, had visited father at the palace that same day in order to ask if he could give us some silkworms that he couldn’t keep as he will spend the summer in Uppsala. Father had been kind to answer and thank him on our behalf, whereupon Mr. Lindstrom had promised to send them to us in a few days. Imagine our joy in owning these insects and being able to study their interesting transformations. May God preserve them for us because cultivating them requires special care of which none of us have any knowledge. (Lotten Ulrich’s diary, Stockholm, 31 May 1833, my translation)

Imagine my surprise when I approached the carton with the silkworms and only saw the two small, and instead of the two large worms, two cocoons of yellow silk. I immediately understood that they had started to spin. (Lotten Ulrich’s diary, Stockholm, 9 July 1833, my translation)

Lotten Ulrich (1806-1887) and her sister Edla Ulrich (1816-1897) lived at the Royal Palace in Stockholm where their father, Johan Christian Henrik Ulrich, was the secretary to King Carl XIV Johan. The family later moved to Norrköping. You can read more about them and their connection with Augusta in a previous blog entry.

So, was the silkworm an upper-class, exotic pet in the 1830s? And were there any mulberry trees in Stockholm so Lotten and Edla had something to feed them?

The Swedish Association for Domestic Sericulture

The Swedish Association for Domestic Sericulture, that is, silk farming, was founded in 1830. The driving force behind the association was a young woman by the name of Charlotte Östberg. She had previously, and anonymously, published a book about silk farming and she also practiced it in Stockholm. The founding members of the association were the husband of Charlotte Östberg and among others, professors Jacob Berzelius and Nils Wilhelm Almroth (the father of Augusta’s friends Ebba and Emma Almroth). By 1841, Professor Carl Henrik Boheman, the father of Augusta’s best friends Hildur and Hildegard Boheman) had also joined the board.

The Silk production at Bellevue

The patron of the association was the Swedish Crown Princess Josephine. She was very much interested in silk production and her husband, Crown Prince Oscar, provided the association with land for planting mulberry trees at Bellevue, a royal park outside Stockholm. Bellevue thus became the center for teaching and promoting silk production in Stockholm.

A thesis on the Swedish sericulture makes for very interesting reading. In summary, Sweden gave up on producing its own silk.

If it hadn’t been for a 190-year-old diary by a girl who described the delight in getting some silkworms, I would never have known about the forest of white mulberry trees at Bellevue in Stockholm. And if I was in Stockholm, I would make an outing to the park and look for any little mulberry tree. Maybe some stump or roots survived and sprouted new trees. From my experience, mulberry trees are almost impossible to get rid of – they really grow like weeds.