In 1840, at the age of 7, Josefine Stenbock was sent to Stockholm to live with Pastor Johan Fredrik Edgren and his wife Lovisa Dethmar and to attend their school. She lived with the Edgren family for four years (1840-1843). 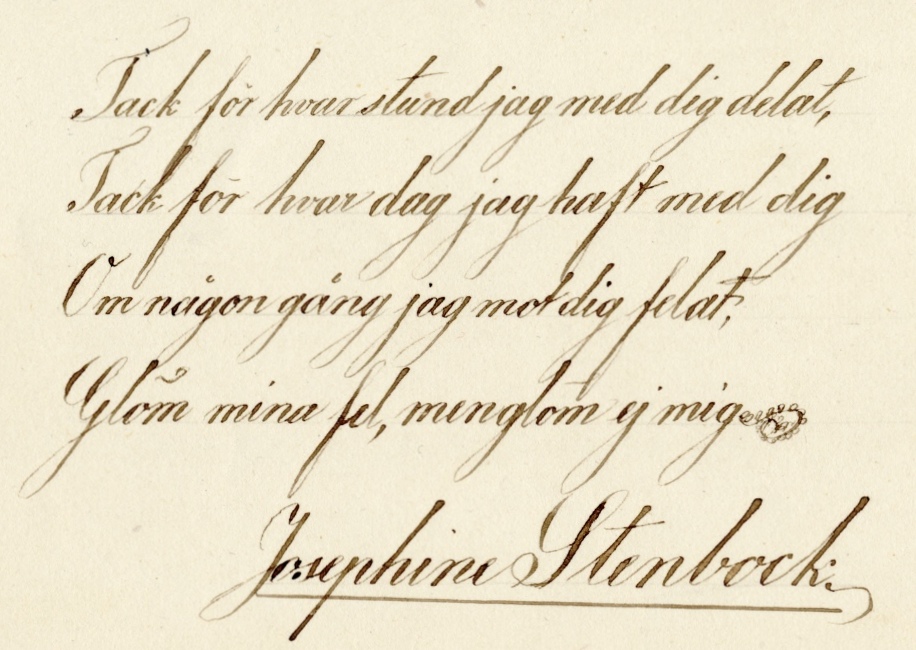 (Similar versions of this poem can also be found in older texts.)

Josefine belonged to a very old, noble family in Sweden. Her full name was Baroness Josefina Albertina Charlotta Fredrika Lovisa Stenbock. She was born 7 May 1833 at Torsjö estate in Solberga parish in Skåne. Her father, Count Magnus Albert Carl Gustaf Arvid Stenbock, was a chamberlain at the royal court and had also been an adjutant to the crown prince. Her mother was Countess Jeannette Margareta Hamilton. Josefine had five brothers (three of which died young) and one sister.

The following year, their daughter, Margareta, was born. For some reason, she was born at Jacob Fredric’s childhood home, Stora Djulö in Stora Malm’s parish in Södermanland).

Then in 1859, Josefine gave birth to a son, Carl Otto Knut Theodor. The young family lived at Sillsjö for 5 years. In 1862, they moved to Näringsberg in Västerhaninge parish. Näringsberg was owned by Josefine’s parents.

In Paris, he visited a photographer (Alophe) at 35, Boulevard des Capucines to have his picture taken. Interestingly, it was at this address that another famous photographer, Felix Nadar, also had a studio. In 1874, Nadar lent his studio to the newly formed group of impressionists for their first exhibition.

The ultimate destiny for the trip was Dax in south-west France. Dax was famous for its hot springs and was the first established spa in France. Many visited hot springs to cure diseases. Was that the reason for his trip? Did he have tuberculosis? Jacob Fredric died while at Dax, only 34 years old.

Josefine also visited a photo studio – but in Stockholm. Unfortunately, there are no dates on the photos.

Josefine was now a widow at the age of 31 and with two young children, 5 and 6 years old. She would have to move in with some family members. In 1865, the little family moved to Klafreda (Klafreström, Klavreström) in Nottebäck parish. Josefine’s brother, Albert Magnus Olof Abraham Stenbock owned half of Klavreström’s iron mill. Josefine and her two children would live with her brother’s family in the beautiful old manor until 1869 when she moved to Copenhagen.

Josefine’s daughter, Margareta Charlotta Johanna Fredrika did not marry and died in 1943.

Josefine’s son, Carl Otto Knut Theodor, emigrated to USA and changed his last name to Hamilton (after his maternal grandmother). He married, had 6 children, and died in 1933. According to genealogy sites, he became an artist (painter) and lived in Brooklyn, NY.