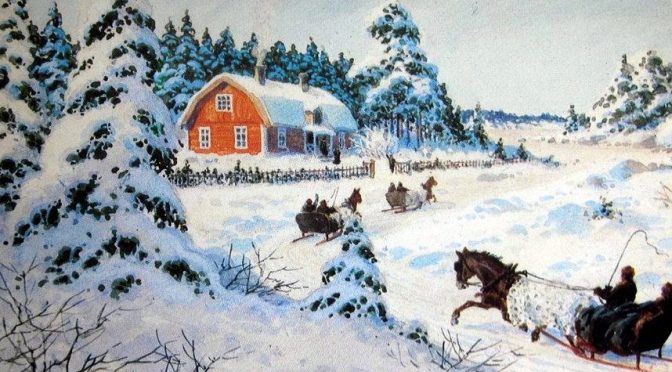 My own beloved Augusta!

If I did not know you and that you would forgive me, I would hardly dare to write to you after such a long silence. Maybe I thought it was longer than you found it to be because I’ve been thinking about writing to you all the time and longing for an opportunity to do so. The reason why I did not write is that my grandmother died and that I have to be there almost every day and keep my aunt company. It happened so suddenly. She was in good health and lively when she had a stroke, but she passed away within a day. We had for a long time been prepared for this because all winter, she had not been very energetic but now she was better than she had ever been. Without her, there is such emptiness in the family. She was always sweet and friendly when one visited her.

If you have ever experienced a death in the family, you know how much there is to do. I cannot help very much, but I can at least keep my aunt company and I have honestly done that. You know how much I like my home, so imagine how boring it has been during the last 3 weeks when I hardly could go home a single day. Now you know the reason why I did not write to you, my own Augusta. That I wish I could have, that you know, and I sincerely wish that you must have longed for a letter from me.

It is good that I have had so much fun earlier this winter because now, it is the end of it. The last amusement I had was a sleigh ride to Haga that Mrs. Dimander organized; very charming. It was awfully fun. I rode with Carl Hedin, … , Emma Hedin was also with us and we drove home in the most splendid moonlight – it beautifully lit up the white snow. Too bad we rode in a covered sleigh. The road conditions were perfect for the sleighs and it was not cold. Imagine how many layers of clothing I was wearing: at least 15 shawls, cardigan, and anything one could think of….”

Lotten’s paternal grandmother, Carolina Westman (born Palmgren), must have been a matriarch in the family. Her husband had died before Lotten was born and she lived with her youngest, unmarried daughter, Emilie Aurora. Through Lotten’s letters, one gets the feeling that Lotten was closer to her father’s family (Westman) than her mother’s (Plagemann).

Carolina Westman hosted great parties for the extended family. Before Christmas in 1845, Lotten wrote to Augusta about one of those parties.

”You asked me if I heard something about my relative Hedin and you apologize for liking him only because of the polka [dance]. You do not have to apologize for that, because I also like him just for the same reason. If I am lucky, I’ll meet him on the second day after Christmas when my grandmother always hosts a dance.”

So where did Carolina Westman live? I checked the census records for 1835 and 1845. In 1835, her address was Drottninggatan 59. Since 1798, this has also been the address of a pharmacy, Apoteket Ugglan. The pharmacy is famous for two reasons:

It is fascinating to think that Carolina Westman must have lived above the pharmacy.

In 1845, Carolina Westman had moved with her daughter, Lotten’s aunt, across the street and a block north to Drottninggatan 72. The house is long gone. From the early 1900s, the block housed one of the first department stores in Stockholm – PUB. It is now a hotel – Haymarket by Scandic.

Note: Carl Theodor and Emma Hedin were Lotten’s 3rd-degree cousins. Another brother, Ludwig, was the father of the famous explorer, Sven Hedin.