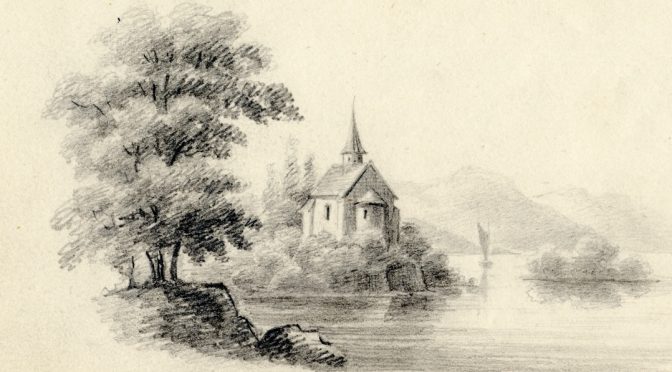 In Cecilia’s memory album, there is a beautiful drawing of a chapel by a lake. The drawing is signed, Louise Rudenschöld.

I assume that Louise copied a print, maybe of a chapel in the Dolomites (based on the architecture of the chapel and the mountains in the background).

Louise’s maternal grandparents, Count Carl Adolf Ludvig Stackelberg and Eva Sofia Adelsvärd owned Hinderstorp where the family lived. They then bought a magnificent castle, Tyresö, southeast of Stockholm. Now, the extended family moved to Tyresö, where they attended their first church service in Tyresö parish in May of 1832.

Louise was 3 ½ years old. Her early childhood memories would have been from Tyresö: running through the huge rooms of the castle, maybe being scared of the portraits on the walls, walking under fragrant linden trees in the expansive park, and maybe playing with a little dog.

In May of 1838, the family moved to Stockholm. Why did they give up their opulent lifestyle (yes, the number of servants in the household, listed in the church records, is mind-blowing, as are their titles or tasks) for an apartment in Stockholm? Maybe it was because of Louise’s father’s position as a chamberlain. Maybe they missed social life. Louise was now 10 years old.

The year Louise gave Cecilia the memory card, the family lived in Jacob’s parish at Malmskildnadsgatan 32. That’s where the shopping center Gallerian is located today.

Louise married architect Per Ulrik Stenhammar (b.1829) in 1858. He designed Ersta Chapel in Stockholm and some other churches. He was also a composer of both sacred and secular music and a member of the Royal Swedish Academy of Music. The couple had (at least) 5 children. Two have their own Wikipedia pages – Ernst and Wilhelm.

The youngest child in the family was Wilhelm. He was musical prodigy.

”Dinner with Countess M. Leijohufvud, together with Lieutenant Adolf von Koch, his Baroness, Mrs. L. Stenhammar, and others. In the afternoon music, among others by the young, 7-year-old Vilhelm Stenhammar, who improvised and played so extraordinarily well that those who had not heard him before, must be amazed at what they rightly called him “a prodigy”. Yes, in truth it may be said here – what may become of this child?” (Diary entry on 2 April 1878 by Pastor B. Wadström).

Wilhelm grew up to be a famous composer and pianist. He composed the music for a national anthem – a song called Sverige (Sweden), that is played on Swedish Radio at midnight every New Year’s Eve.

Louise was raised in a deeply religious family. Her father was one of the founding members of The Swedish Evangelical Mission Society (Evangeliska Fosterlands-Stiftelsen). Pastor Wadström, who wrote the diary entry above, was a spiritual mentor to Louise’s grandfather. In his book From Memories and the Diary – Notes from the years 1848-1898 (Swedish: Ur Minnet och Dagboken – Anteckningar från åren 1849-1898), Wadström also included writings in his memory book by his friends. Lousie, her parents, her sisters, and her husband, all contributed to Pastor Wadström’s memory book and Louise even made a drawing.

According to Uppsala University Library, the following drawings were made by Louise’s grandfather (who had the same name as her father, Thure Gabriel). These drawings of Tyresö were supposedly made in 1820-1830. Could they actually be drawings by Louise’s father? Nevertheless, they are beautiful drawings. 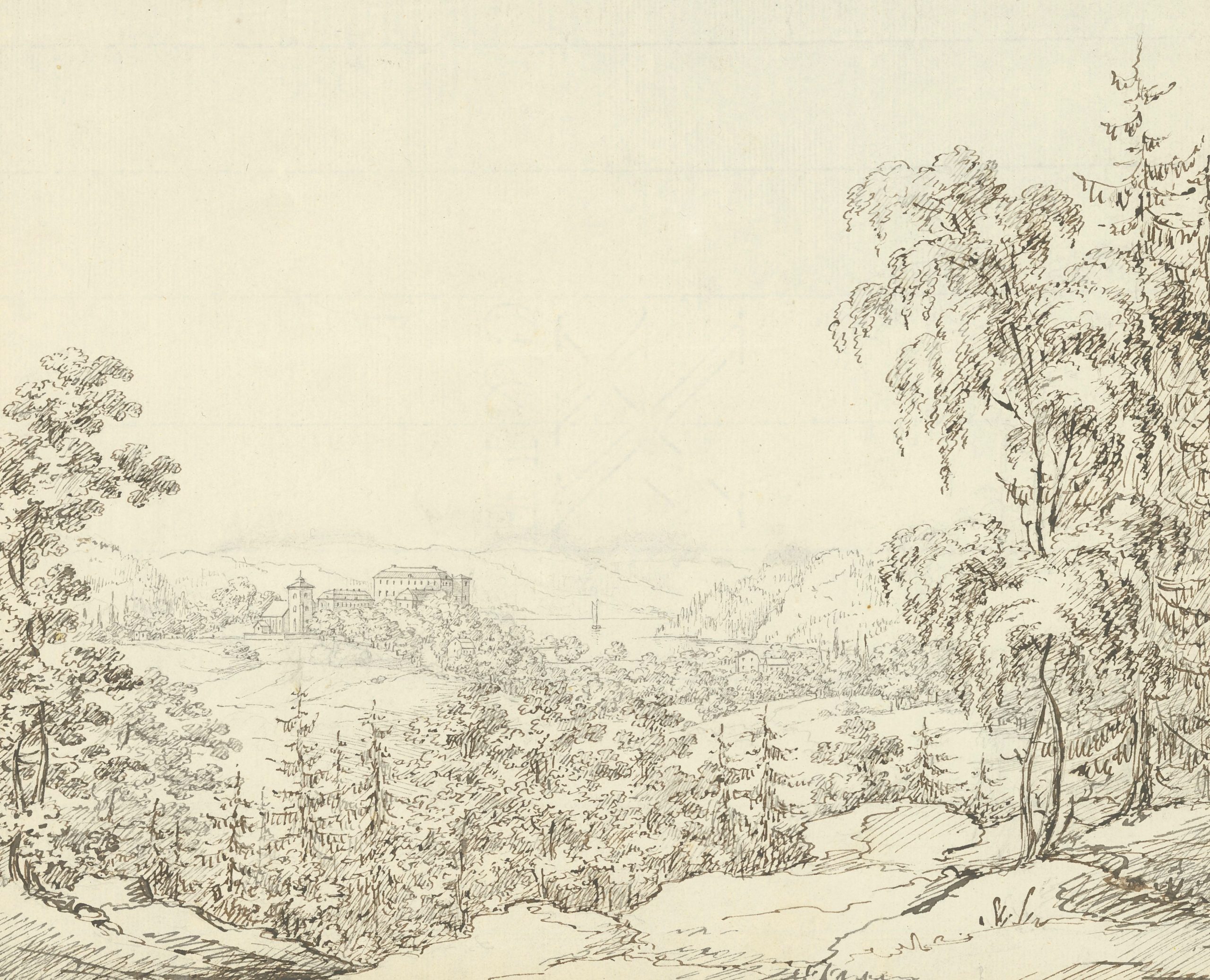 Louise lived a long life and died in Stockholm in 1902. Her diary from 1884-1899 and some correspondence with her family members can be found in Wilhelm Stenhammar’s Archive.