It all started with a promise to a charming captain in the summer of 1850.

Our captain’s name was Krüger. He was a very polite and charming young cavalier who fulfilled all the duties of a host on his steamboat. He entertained me quite pleasantly during the trip, a trip which is also one of the most beautiful and comfortable one can undertake, and before we parted ways in Söderköping, we agreed to dance the first waltz on the first Innocence in the month of January. Let’s see if that happens or not. (Augusta’s diary from the Göta Canal)

What was the Innocence?

The Order of the Innocence is a Swedish secret order that started in 1765. It supports charities while creating “innocent amusement” for its members. During its Day of Solemnity, new members are inducted. The Innocence Ball – or simply, The Innocence – is an exclusive and elegant ball which at Augusta’s time was held each January at the Stockholm Bourse. The order also arranged other balls during the year, and that is probably why Augusta mentioned it as the “first” Innocence.

There is also another secret order that similarly organizes an exclusive ball – The Order of the Amaranth (Stora Amarantherorden). It was created by the Swedish Queen Kristina in 1653 and then reinstituted in 1760. The grand ball, The Amaranth, was at Augusta’s time also held in January but at De la Croix’s salon.

Presently, The Innocence and The Amaranth are held in alternating years at Grand Hotel Stockholm.

Not everyone could become a member of the orders – you needed contacts among the aristocracy and/or the wealthy merchants. What if you did not belong to the aristocracy or came from a wealthy family, what would you do? For a girl, this was the place to be seen if you wanted to marry well.

Augusta’s mother had made sure that Augusta was to board with a family that could “bring out into society those who lived with them”.  So in the fall of 1844, Augusta moved in with a noble family headed by the widow, Countess Jaquette Ribbing af Zernava (born Sparre af Rossvik). Augusta was 17 years old and ready to be a debutante.

Did Augusta attend The Innocence and The Amaranth?

Augusta didn’t keep a diary until 1847. There are letters from her friend Lotten, but not until 1845 when Augusta had already left Stockholm. And then there are a few letters from Augusta’s mother to Augusta in 1844 and 1845 – none of which mention any balls.

But then there are archives!

Kerstin and I hit the Royal Library first. We get help from the experts in the hand-script department. After lunch, they have found the boxes of Innocence records and we start to untie strings and open the boxes with bound books.

On 7 December 1844, The Order of the Innocence had its meeting at the Bourse, to induct new members. A letter indicating the names of those who had been called to the meeting is included in the archive, as is a book of members, sorted by date of initiation.

Kerstin and I go through the list of names, and there it is – Demoiselle Emelie Augusta Söderholm has been called to the meeting. Now we search for her name in the book of members and, again, we find her signature and member number 4718. Her friends, Ophalia and Augusta Sjöstedt, sign below her and get numbers 4719 and 4720.

So she became a member of The Order of Innocence in December 1844 and would attend her first Innocence Ball on 11 January 1845.

The next day, we visit the National Archives. Again, boxes held together with strings are carted to our reserved desk in the very quiet reading room. Wearing white cotton gloves, we untie the strings and look at the bound records and envelopes.

There is a book of members listed alphabetically and there are letters describing each meeting or ball. As Augusta’s first Innocence Ball was in January of 1845, we assume her first Amaranth, if she was inducted, would also be that month.

We check the protocols for 1845, and there it is! In the protocol dated 6 January 1845, the date of the Amaranth Ball, Augusta is listed as a new member. We then find her name in the book listing the members.

And what did she think about the balls?

Six years later, in 1851, Augusta attends a ball at The Bourse and reminisce on her feelings when she was 17.

Last Friday, I accompanied the Theodors to a dance soirée at The Bourse. It was pretty animated and, in the words of the Ribbings, it was “la crème de la socialite” who from the gallery looked down on the dancing youth – a colorful crowd of blue, white, red, and yellow ball gowns with matching flower garlands under which one often saw a beautiful face.

Men of la beau monde, with and without uniforms, swarmed around in the richly illuminated, beautiful hall where joy seemed to be the evening’s heavenly patron. It was thus, as it is called in Stockholm, “a beautiful ball”, but God knows that I did feel a sense of regret when recalling memories from six years ago and saw myself – with a completely different feeling of joy – flying around the hall in a lively Strauss waltz. At that time, in a moment of happiness, I forgot everything around me. In this moment, on the contrary, I felt both hot and tired. At that time, I was close to despair when the final notes of the last dance died away. At this time, I was quite pleased when I finally sat in the covered sleigh on my way home.

After having found Augusta in both these archives, you just have to wonder – where else has Augusta left footprints that we are not aware of? 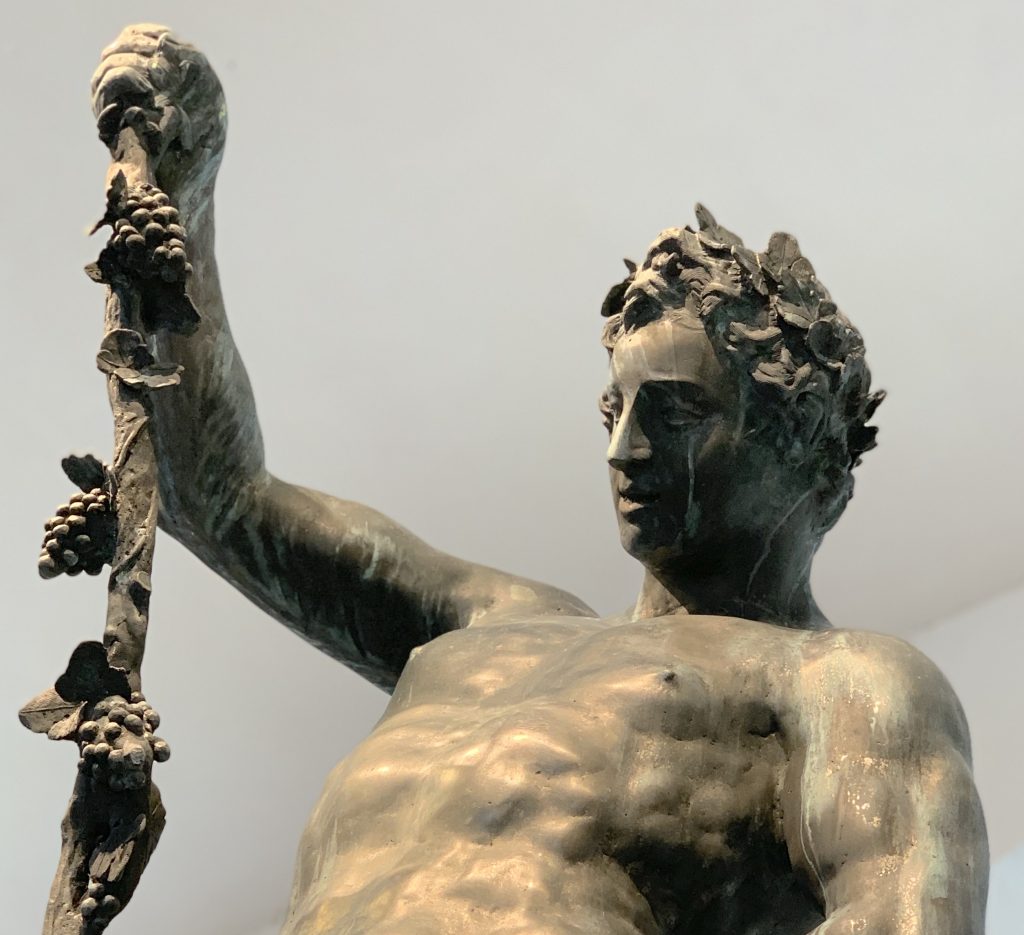 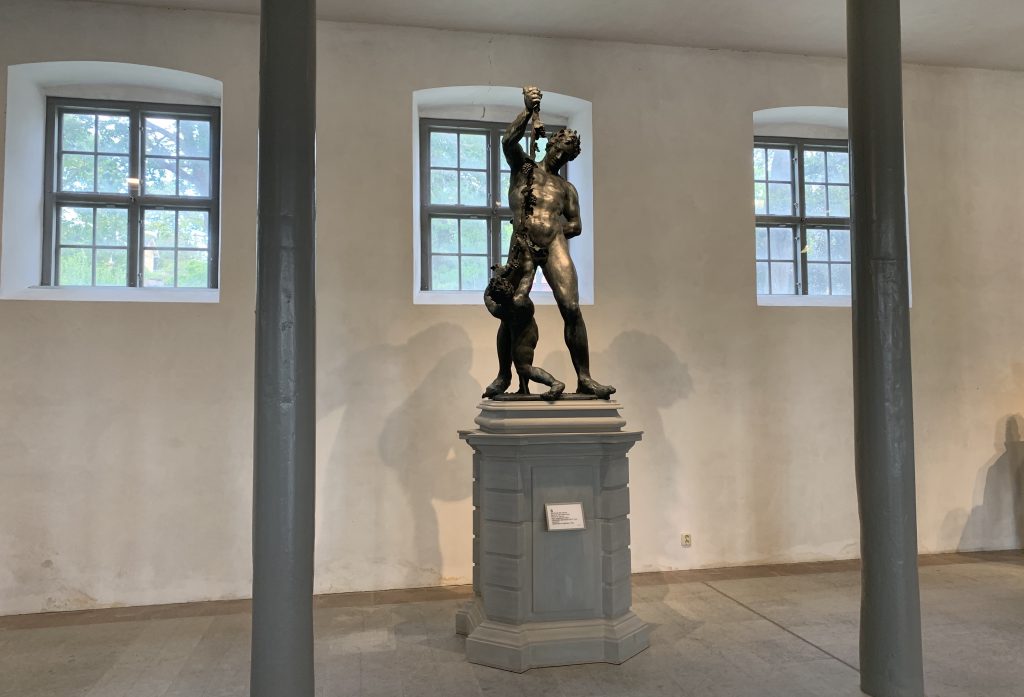 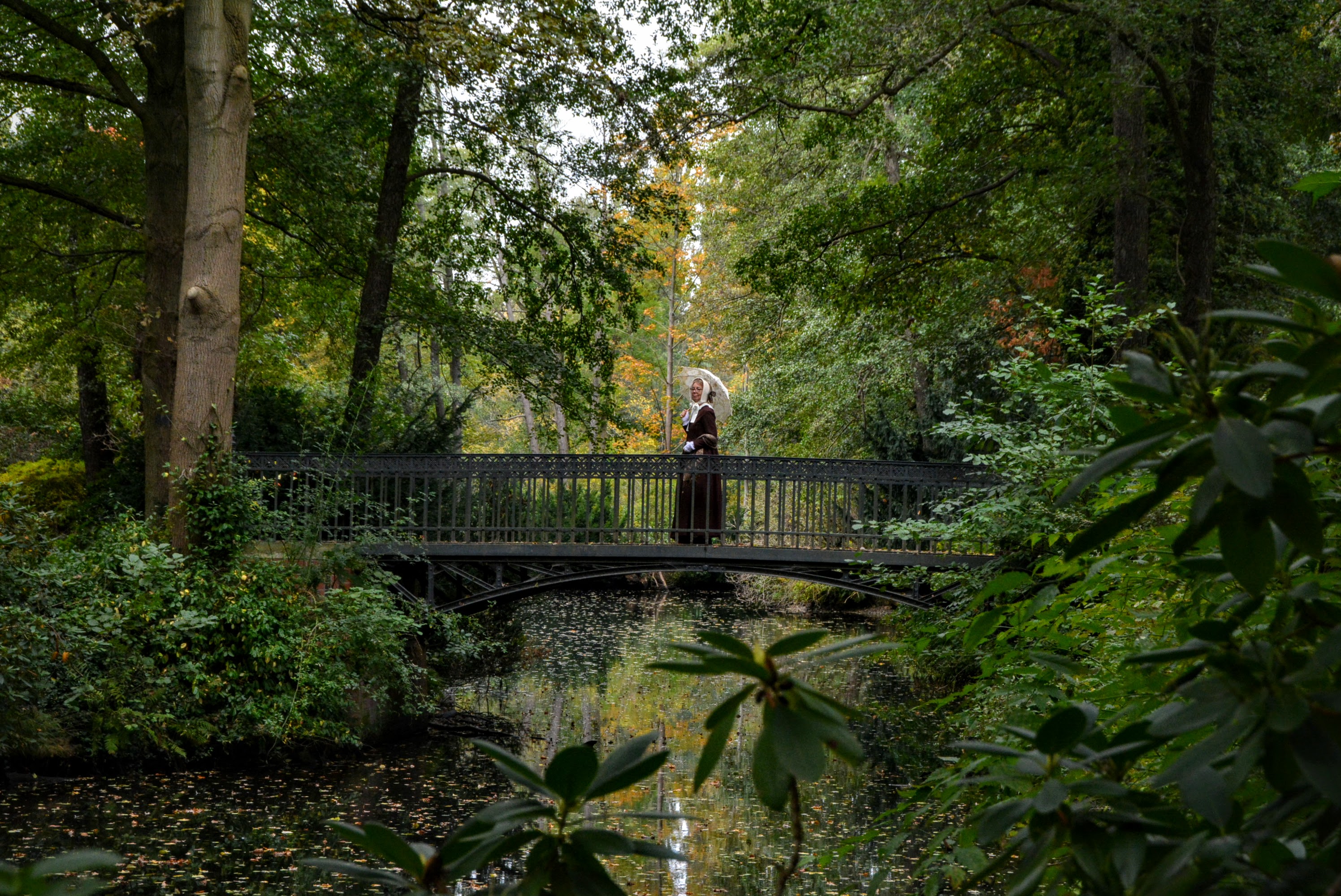 Look, do you think these are Elisabeth Schwan’s? I ask Kerstin.

On a small round table, some beautiful antique fans are displayed under glass.

Kerstin and I are visiting Stjernsund’s Castle where Augusta’s friend, Elisabeth, lived after she and her husband bought the beautiful castle from the royal family in 1860. I wrote about her earlier this year (The Girl in the Yellow Ball Gown: Elisabeth Schwan).

We are on a guided tour of the castle, eagerly looking for traces of Elisabeth. Much of the inventory would have belonged to Elisabeth’s and Knut’s daughter-in-law, who lived in the castle until her death in 1951. But maybe there would be a few things left from Elisabeth?

And now it looks like I have found something that could have been hers. Our wonderful tour guide, Pernilla, confirms that this is indeed Elisabeth’s. Another similar table has some old letters addressed to Elisabeth. Elisabeth also brought all her copper pots and pans with her when they moved to Stjernsund – all hanging nicely in the kitchen, sorted according to size.

Using the language of Augusta’s time, Stjernsund is handsomely situated on a promontory above the still, blue waters of lake Alsen. Here, Elisabeth and Knut raised 5 sons, born between 1851 and 1861.

I wonder if she kept a diary? Did she miss the social life in Stockholm? Did her friends from Stockholm come and visit her?

While Elisabeth was busy with her family, her husband made Stjernsund famous for its cattle. Knut Cassel was interested in animal breeding and through selection of superior breeding stock, the herd at Stjernsund came to be the most influential genetic stock for what is now the Swedish Red-and-White Breed of dairy cattle (SRB).

Kerstin and I visit the exhibition in the Dairy. There are two photographs on the wall, one of Elisabeth and Knut with their 3 oldest sons (Fredrik b. 1851, Carl b. 1853, and Knut August b. 1855) and another one of Knut later in life. As their 4th son, Albert, was born in August of 1857, and Elisabeth is having a 2-year-old Knut August on her lap, the picture must have been taken around 1856-1857, prior to the family moving to Stjernsund. Elisabeth would have been in her late 20s in the picture and possibly pregnant with Albert.

Finally, while doing the genealogy research on Knut Cassel, I discover that he and Augusta were 4th degree cousins (through Augusta’s father’s ancestry).

As Kerstin and I always do on our ”Augusta journeys”, we dressed appropriately for a visit in the early 1850s. Our new friend and Stjernsund’s guide, Pernilla Gäverth, captured our visit in the following pictures. 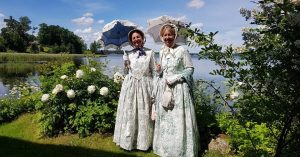 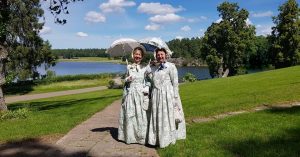 About SRB cattle (in Swedish): http://www.scanred.se/hist02sv.html