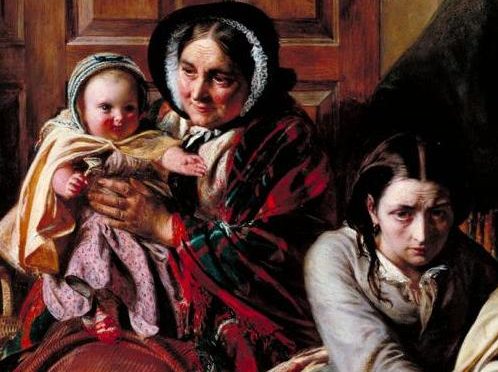 Hedvig Sophia von Sydow was ranked as 19 of the 92 girls who were confirmed in St Jacob’s parish in Stockholm in the spring of 1844. That she made the top 20 list was due to her father, Adolph Peter, being a counsel at the Department of Commerce (Swedish: Kommerseråd). His father, in turn, had been a member of parliament and, although not belonging to one of the noble families in Sweden, Adolph Peter’s brother had in 1830 been introduced at the House of Nobles. The von Sydow family was well respected and influential.

Hedvig was called Hedda by her friends – and she had many. One of her close friends was Marie-Louise af Forsell whose diaries were published in several volumes.

Already last week, Hedda Sydow had wanted to see us at the Seippel’s, but then had to postpone it as Hilda was ill. And now she had to do the same yesterday because of my flu. So I felt guilty today and went to see her and would have gone even if my shivers had been worse than they actually were.

Time flew fast from 5 to 11. I ate so many figs that it soon became difficult for me to speak.

Marie-Louise af Forsell’s diaries are full of anecdotes about Hedda and her father, who she refers to as the old, honorable, Uncle Sydow.

Hedda and her father often visit the Forsell family. They even spend Christmas Eve with them. Which made me wonder – where was Hedda’s mother?

In the fall of 1844, Hedda has turned 16. She is living with her father, Adolph Peter von Sydow, born in 1785. There are also a housekeeper and two maids living with them.

So what happened to Hedda’s mother? I find her name in a family biography. Her first names were the same as her daughter’s, Hedvig Sophia, and her family name was Sundberg. She was born in 1792 and died in 1858.

Did Hedda’s parents divorce or separate? Was the mother ill and living somewhere else? I just have to find out.

I decide to look at the Household Examination Records instead. This is where the pastor visited each family each year and made remarks about each household. I could find out how long they had lived at the same address and when Hedda was born, as her name would have been added to this record.

I start with 1845 and go back in time. The family is the same every year – Adolph Peter, then Hedda, then the housekeeper…..…Sundberg! Wasn’t that the maiden the name of Hedda’s mother? Hedvig Sophia Sundberg! It just hits me that Hedda’s mother is living with them, but she is not listed as being married to Adolph Peter. She is their housekeeper!

I continue my search, going back in time until I get to 1834. There is a comment before Hedda’s name: foster daughter.

So who lived in the household when she would have been conceived? I assume Hedvig Sophia Sundberg is her mother, but if she is listed as a foster daughter and her mother is not married to Adolph Peter, anyone could be her father…

In 1827, only three people are living in the apartment: Adolph Peter von Sydow, Johan Henrik von Sydow, and Hedvig Sophia Sundberg – listed as their maid. I look up Johan Henrik. He was Adolph Peter’s cousin. He later married, became the mayor of Gävle, and had two sons.

Initially, I thought I knew who Hedda’s father was and didn’t know what had happened to her mother. Now I have found her mother and don’t know for sure who her father is. Could I still find it in the birth records? I now know that her birth record would be in the church’s book for illegitimate children.

I start again with St Jacob’s parish where the family had lived the whole time. Hedda is not in the book. That is strange. I will just have to check for her record in all parishes in Stockholm – that is, finding her among all illegitimate children born in Stockholm in July of 1828.

So I have checked St Jacob’s parish, and I also don’t find her in Nicolai – the parish of Stockholm’s Old Town. Next, I look at Klara’s parish, and that is where I find her!

Hedvig Sophia, born 22 July and by Beckman baptized the same day. Parents not disclosed. Mother 35 years old. Witnessed by Mrs. Frestadius who attended the birth. The General Maternity Hospital. The child is not registered in its ledgers.

So Hedda was born at the General Maternity Hospital where the majority of women giving birth were single mothers. The hospital was located at Fredsgatan No. 9 (the block of Rosenbad) which belonged to Klara’s parish and, therefore, all the children born at the hospital would be baptized by the pastor in Klara’s parish. That explained why she was not recorded in her home parish, St Jacob.

I also look up Mrs. Frestadius in the census records. She was a midwife and the director of the hospital.

Who took care of little Hedda?

So Hedda was born on 22 July 1828 but didn’t move in with her parents until 1834 when she was 6 years old. Who took care of her? I check the archive for Stockholm’s orphanage and do not find her name in 1828. Most likely, she was taken care of by some relative.

When I first searched on Hedda’s mother in the digitized daily newspapers, I found her obituary in 1858. It stated that she was the widow of Adolph Peter von Sydow. So when did they get married? I decide to check all Household Examination Books from when Hedvig Sophia Sundberg moved in with Adolph Peter and until he died in 1850.

So they married in 1847. There is no announcement in the daily paper. But I find their marriage record on 13 June 1847 in St Jacob’s marriage books.

Adolph Peter moved to Stockholm in 1806. He had never been married.

Hedvig Sophia was born on Ornö, an island outside Stockholm, and then lived in Järna, south of Stockholm, before moving to St Jacob’s parish in 1819. She had never been married. On the question about the family man or legal guardian to approve this marriage (Swedish: Giftoman), Hedvig Sophia states that she has been granted the right to be legally independent. That is interesting as women had to apply for this right prior to 1863! And then there is an interesting comment:

Daughter Hedvig Sophia, under promise of marriage, born 22 July 1828. In the book of baptisms in Klara and declared in the records of marriage banns.

Does that mean that Adolph Peter is the father or simply that someone had promised to marry her when she got pregnant?

I also look for Hedvig Sophia’s birth record at Ornö but don’t find it. I also don’t find her moving from Järna to Stockholm in 1819. But at least, I know her story from 1819 until her death in 1858.

So now they were a legitimate family. I wonder if it changed Hedvig Sophia’s acceptance among their friends.

Returning to Hedda and her friend, Marie-Louise af Forsell

Hedda and Marie-Louise were almost neighbors. Hedda lived in a block named St. Pehr, house no. 14. The block doesn’t exist anymore. Several blocks in this area were demolished to make space for a shopping center – Gallerian. Marie-Louise lived next to St Jacob’s Church and by Kungsträdgården, the large park in the center of Stockholm.

Marie-Louise’s family came from a country estate, Yxe, close to the town of Nora. She had many cousins and spent the summers there – all documented in her diaries. One of her cousins at Yxe was Frans August Detlof Heijkenskjöld (Augusts and Marie-Louise mothers were sisters, born Geijer). August was a lieutenant in Wermland’s infantry. Maybe Hedda met August when he visited Stockholm. Nevertheless, August and Hedda married on 9 August 1849.

Again, I get curious. What did Hedda disclose about her background in the banns of marriage?

Hedda does not list the parish where she was baptized, only that she was born in Stockholm. It would have been very hard (in the pre-digital time period) to find her birth record as illegitimate in a parish where she had never resided. On the question of when she moved into St Jacob’s parish and from where, she avoids the question by stating that she was confirmed in St Jacob. What about her first 6 years? Where did she live?

But she got married anyway, and into a noble family, the Heijkenskjölds. Her father gave his approval.

Life in the countryside and back in Stockholm

After the wedding, Hedda and August move to a farm, Hult in Ervalla parish, close to his family home Yxe and the town of Nora. The following year, Hedda gives birth to a son, Adolf Detlof, born on 4 July 1850. He grows up to be an officer in Svea Livgarde in Stockholm, marries but has no children.

I don’t know when August and Hedda left Hult, but in the 1880s, Hedda is a leading member of various charity organizations in Stockholm. She serves on the board for The Silent School – a school for deaf children – and helps organizing charity bazaars to support schools and workhouses for children and young adults with intellectual disabilities. Her name is listed among many other leading women of the time: Rosalie Olivecrona (born Rosalie Roos), Thorborg Rappe, Fredrika Limnell, and others.

When I started to search for Hedda, her life seemed to be one of privilege. Her father had an important position and she socialized with the right families. She married well. Later in life, she worked with other leading women to improve the situation for children with special needs. End of story.

But I found out that her life was so much more complicated because of societal rules and the power of the church.

I wish I could have found out more about Hedda’s mother. And maybe I still will. She was born on an island outside Stockholm where most families were engaged in farming or fishing. She came to the mainland to work as a maid and ended up being a maid to an educated man in Stockholm. Then she got pregnant, unmarried with a lofty promise of marriage. Having a child out of wedlock was against the law. Obviously, she would have had to conceal her pregnancy. And when the time came, she had to give birth in the hospital where she could be anonymous (according to a law of 1778). She would not be able to keep her daughter.

For some reason, her employer (and presumably the father) later allowed the daughter to move in with them when. She would now be promoted to housekeeper and have a maid or two to help her. But there was no marriage in sight and the employer and his “foster daughter” would socialize with other families while she was not recognized as the mother or a wife. It wasn’t until the daughter was of marriage age herself that the employer made good on the promise of marriage.

It is a very sad story.

“Marie-Louise af Forsell or Marie-Louise Forsell (5 September 1823 – 3 April 1852), was a Swedish noblewoman diarist. She wrote a diary from the age of sixteen to her death in childbirth at the age of twenty-nine. Her diary was published in four parts by Syster Heijkenskjöld between 1914 and 1917. They became a big success when they were published, and are considered a valuable historical depiction of the everyday conventional life of a Swedish noblewoman in the mid-19th century.”

Feature image by Abraham Solomon. Detail from the painting Waiting for the Verdict. 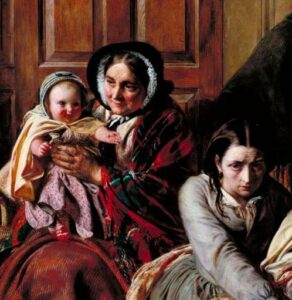 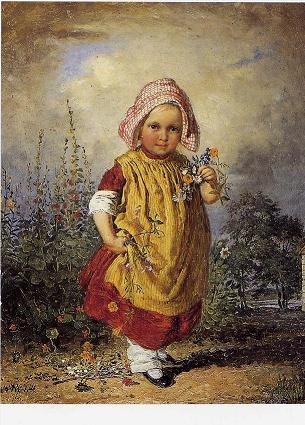