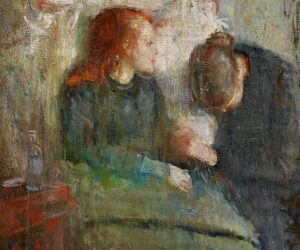 Augusta spent the summer of 1852 at Loddby. She was ill with tuberculosis. Adolf Nordvall (who she would later marry) was studying in Uppsala and they wrote long letters to each other. He worried and inquired about her health. She tried to sound upbeat about it, but didn’t like her local doctor: Loddby 31 August 18,52 …My health and my strength are improving in big… 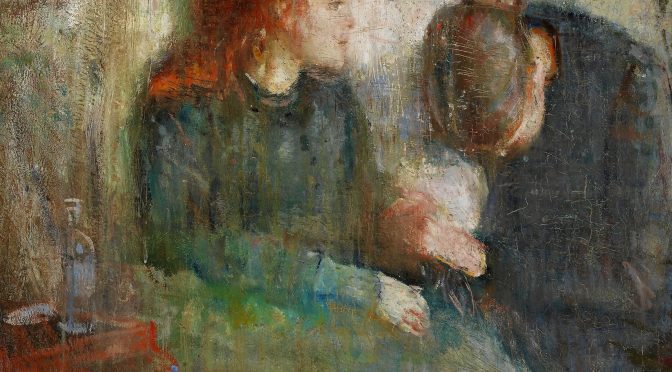 Augusta spent the summer of 1852 at Loddby. She was ill with tuberculosis. Adolf Nordvall (who she would later marry) was studying in Uppsala and they wrote long letters to each other. He worried and inquired about her health. She tried to sound upbeat about it, but didn’t like her local doctor:

…My health and my strength are improving in big leaps. Doctor Almqvist is often out to see me and each time he becomes more complacent. Yesterday, he likened me to Hebe [the Greek goddess of eternal youth], so you can imagine how I have improved since you last saw me…”

But what she really wanted was to see Adolf again. And the doctor was getting on her nerves:

…I was just interrupted by the doctor  who has been sitting here for 5 hours and talked so much nonsense that I am really tired, as if I had walked several miles. He is unsatisfied with my plan to travel to Stockholm and, to be truthful, I also think it might be unnecessary. One doctor is exactly like another; they don’t have any interest in their patients – or know what they should prescribe – and I am really averse to having to start explaining my misery to yet another [doctor].

In the beginning of October, Augusta finally traveled to Stockholm and stayed with her old friends, the family Hjort. She now got a new doctor, and not just any doctor, but a professor and also the royal family’s private doctor: Pehr Henrik Malmsten.

…The Professor visits me every day and always has a gracious disposition….

…I am completely taken in by Professor Malmsten. He is the most kind, wise, and pleasant doctor one can encounter; always happy and nice, never grumpy or careless like other Sons of Aesculapius [the Roman god of healing and medicine]. What I least admire in him is his terrible stubbornness to coax me into taking fish oil, and he will most likely succeed in the end, even though I fight for the longest time….

Augusta writes that she lies about taking the fish oil and has qualms about lying to the doctor. She tells Adolf in her letter that she only takes one table spoon of fish oil every day instead of two, but “it’s so terrible, so terrible…”

In addition to the terrible fish oil, she is not supposed to “liven up or encourage her numb feelings”. Professor Malmsten thinks that she is too lively. She has to stop laughing, speaking, and debating; sing or play the piano, and to write – and if  writing is necessary, then only a few lines. Also, no reading for the time being. She is not supposed to do anything that will liven up her imagination or make her emotional. This, she is supposed to do for 6 months: a life of “muteness and lifelessness”.

Despite the harsh restrictions and the horrible fish oil, Augusta still likes Professor Malmsten, and the feeling is probably mutual. One day when he visits her, he is coming straight from the death bed of a young woman and he shares his feeling with her: “..I saw that my Professor had shed some compassionate tears over the young woman.”

What Professor Malmsten didn’t know was that tuberculosis was caused by a bacterium. It would take another 30 years until Robert Koch discovered the bacterium in 1882. The only thing he could prescribe was fish oil and rest – and later, sea air at the spa town of Varberg, where Augusta died in 1855.

But in the correspondence between Adolf and Augusta’s mother, following Augusta’s death, Professor Malmsten is implicated – did a prescription contribute to Augusta’s death?  There are no details, just hints. So could we find out if she received any other medications besides fish oil?

I contacted the Swedish National Archives who confirmed that they had Professor Malmsten’s patient journals for the time period during which he treated Augusta. They also had a considerable amount of his correspondence. Could any of this material shed any light on Augusta’s treatment and cause of death?

Today, Kerstin and I visited the archives in Stockholm. It is a serious place. And very quiet. An archivist delivered the brown paper boxes that contained the journals and letters. With cotton gloves, we untied the strings and opened the boxes.

The patient journals were small note books. When I opened the first one, it was not what I had expected. For each patient, there was a row, and the columns represented the days of the month. In this matrix, the doctor had made an X on the day he had seen the patient.

We knew which days Professor Malmsten had visited Augusta, but her name was not listed on any pages in the journals. Why? Was she a special patient? A private patient, paid for by someone else – like her brother-in-law? Was this book a record for billing? No clues.

Then there were actual patient journals – called Disease History, but they seemed to be sorted by diseases and possibly for the sake of research. There were journals for patients with Chlorosis [anemia], Bright’s Disease [nephritis], and Syphilis. Those were some of the diseases that Professor Malmsten was interested in. I forgot to check if there were any patients with Phthisis (the Greek name for tuberculosis).

And finally there were the letters. Lots of handwritten, old letters from patients but none from Augusta’s family.

So we removed our cotton glows, wrapped up the boxes, tied the strings, and carted the material back to the archivist. The visit had only taken an hour as there was nothing to be found.

What should we do for the rest of the day?

”Let’s check out the Military Archives,” said Kerstin. ”Maybe we can find out more about Augusta’s dad!”

And off we went. 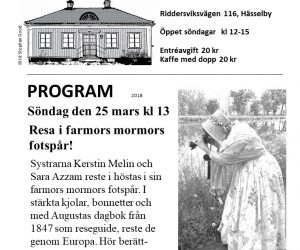 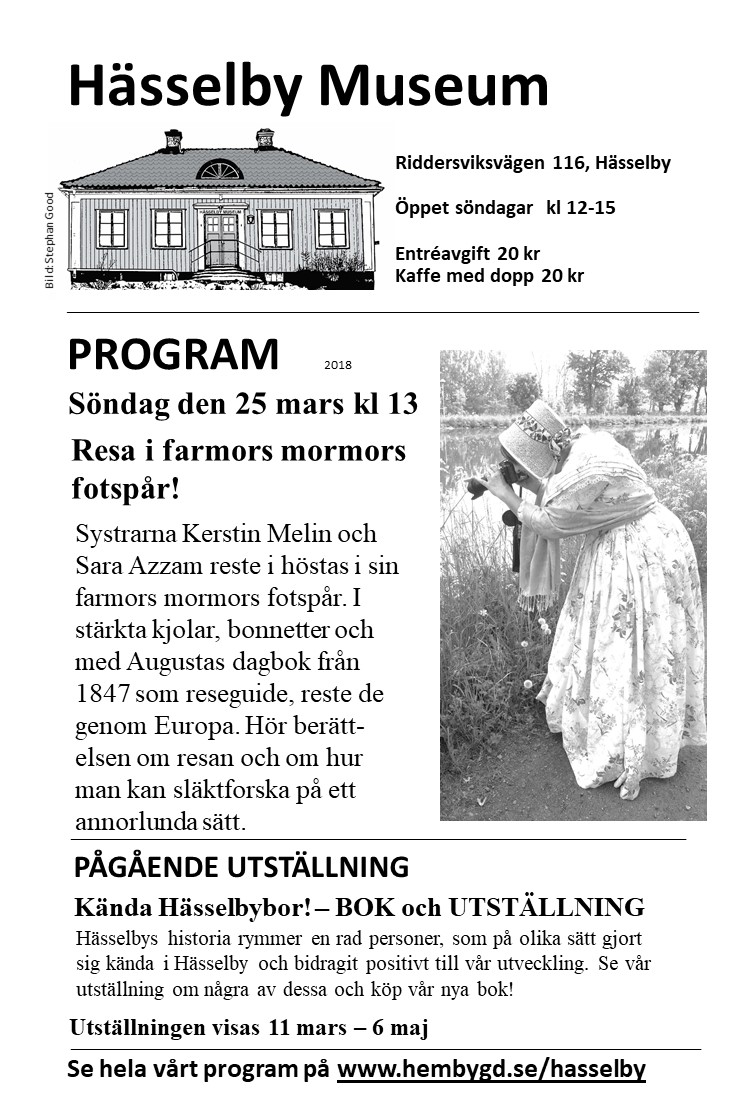 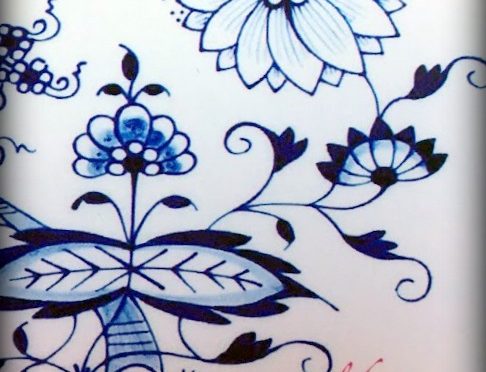 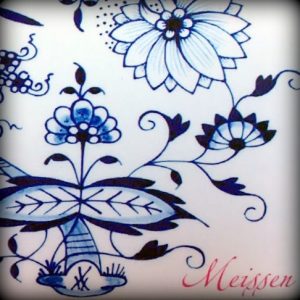 Ever heard of Meissen porcelain? It is one of the most famous porcelain manufacturer in Europe – since 1710.

Augusta visited Meissen on her journey in 1847. Meissen is not far from the city of Dresden and Augusta stopped there on her return trip from Prague. She didn’t write much about her visit:

”We only stayed in Dresden for one day and visited the large porcelain factory where we bought a few small things.”

A contemporary Swedish writer, Sophie von Knorring, visited the porcelain factory the year before and wrote a little bit more in her letter home:

”In the afternoon, we first went to the Catholic Church, the first one I have ever visited, and then to the porcelain factory. From all the many magnificent objects, I would not be able to bring home many, but the little I chose were so much more beautiful and expensive. You will see, when I return home ….”

Kerstin and I visited the Meissen porcelain factory on our journey last fall. We got to see the various steps in making porcelain dishes and figurines. And then we ended up in the gift shop. What should we buy?

Augusta bought a few small things to take home to Loddby, and Sophie von Knorring bought a few, beautiful and expensive things. But what were the things they bought?

We walked around and looked at some of the things we had seen being made during the factory tour. The prices were astronomical. There was really nothing in the gift shop that we could afford and also want….except for the usual souvenir – the refrigerator magnet.

We each bought one.

What would Augusta have thought of that?

A little painting that would stick onto a cold-cabinet in the kitchen – a cabinet where you could store milk and cheese and other things so you wouldn’t need to go to the cellar. If someone got hungry in the middle of the night, they could just go and grab something. Or you could pour yourself a glass of cold, white wine. What luxury! And why not decorate this cold cabinet with a little piece of art that would remind you of what you had seen on your exotic journey.

Augusta would never have believed it! 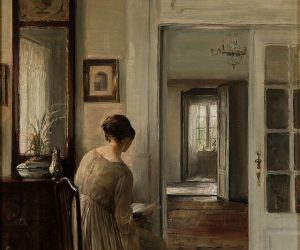 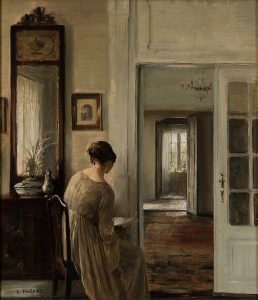 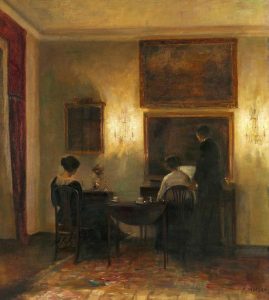