Augusta celebrated New Year’s Eve 1851 with her friends. She was 24 years old and life was still good:

Today we were invited to Bååthens1. There were 10 other guests from Norrköping, and of the most boring kind. Luckily there was a tiny Mrs Lundmark from Malmö who was particularly talkative, just like the hostess, and as Gustaf2 and I made up the 3rd and 4th members of this little coterie, we could congratulate each other on our contribution to making the evening pleasurable. A simple supper consisting of lutfisk and porridge as well as steak and a pastry was taken and the party ended around midnight. It is now 2 am, the new year has begun; will it give us clear or cloudy days? The future will give me answers.

The wonderful answer is that 1852 was a momentous year for Augusta – the year she met her future husband Adolf Leonard Nordvall. 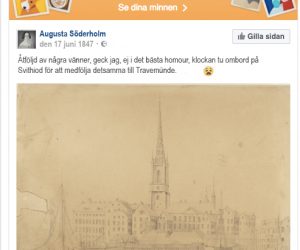 When discovering a diary, it is like stepping into someone’s home without knowing anything about the family. There are names mentioned, but it is not like a novel where the author will provide you with character descriptions. And at the time of Augusta’s diary, there were no photographs.

Fortunately, there is a lot of recorded genealogy; dates and places of birth, marriage, and death. And of some family members, there might be a painting or a drawing.

It consisted of only 4 persons: Augusta, her brother, her mother, and her brother-in-law.

When the diary starts in 1847, Augusta is almost 20 years old. Her older brother August is 31. What we glean from the diary is that Augusta and her mother would rather not have him around: “Poor August! He will never be free from a life that is a never-ending chain of pain, bitterness, and suffering, and we will never, ever stop crying over him.”

Augusta’s mother, Anna Catharina (Charlotta) Fagerström is 59 years old. She got married at 17, a widow at 47, and had 5 children of which only 2 are still alive in 1847. Augusta was born when her mother was 39 years old. From the diary one discerns that Augusta cares a lot about her mother.

And then there is Gustaf Fredrik Lejdenfrost. Lejdenfrost is a 49-year old, wealthy, textile-mill industrialist who owns the estate Loddby, just outside Norrköping. This is where the family lives. He is twice a brother-in-law to Augusta. He first married Augusta’s sister Amalia (b. 1808) who died in childbirth at age 25.  He then married Augusta’s oldest sister Charlotta (b. 1806) who died from influenza only two years after their wedding. One can only wonder how one could overcome being a widower at age 35 and again at age 39! As he is well connected and successful, he becomes Augusta’s benefactor which allows her to study and be part of the society in Stockholm.

That is the small family at Loddby.

But then there are so many relatives, friends, and suitors. The journey has only started! 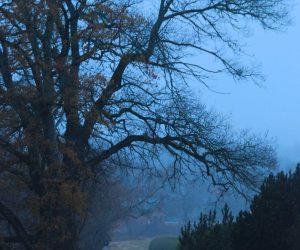 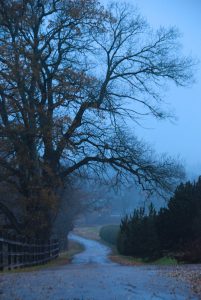 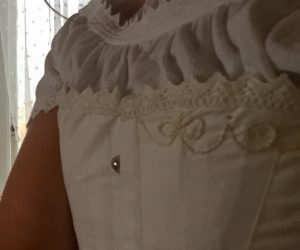